Before Christmas I received a friendly letter from British Gas asking me to contact them to arrange an electricity meter change at James Street as it had come to the “end of its life”.  It lingered at the bottom of my in-tray until I was ready to spend a quiet afternoon on the phone listening to elevator music.  However, the call went surprisingly quickly and we made an appointment for a few weeks later.

At the next rent collection/coffee/gossip stop at the house I asked if anyone was going to be around for the four hour window to wait in for the engineer.  Sarah  said she’d only let him in if it was a straight swap i.e. standard dumb meter for dumb meter as opposed to the installation of a smart meter.  The word “smart” hadn’t been mentioned during the call or in the letter so I assumed it would be the dumb one.  A few days before the meter change, an email was sent to me saying that BG were looking forward to making my life a million times better with the forthcoming Smart Meter installation.

I went back to Sarah who, quite frankly, went berserk.  To be fair, she was active at the anti-fracking protests and I have a feeling I saw a mild version of her pro-environmental passion.  I called BG again to ask why this was the first I’d heard of it when the call handler said it was for gas AND electricity AND at a completely different address!  Well, by now, I had the distinct feeling that something fishy was going on so said I hadn’t received any communication about the other house.  “Oh well” she said “whilst you’re on the phone, I’ll book smart meter installations there too”.

“Er, no you won’t” I replied.  “If I’m being offered something so brilliant that it’ll change my life and it’s free, I want to know more”.  During all this, Sarah risked her life accessing the wi-fi to print off information about smart meters and, whether it’s true or not, here is a summary of why many people don’t want them in their homes:

By the time the engineer turned up, Sarah had cancelled her dentist appointment to be there, put up three “Do Not Install Smart Meter” signs on the front door, meter box and hallway and was ready and waiting to not only inspect the equipment he was installing but checking he hadn’t sneakily attached any smart devices.  To my knowledge, he was eventually allowed to leave peacefully…… and in one piece.

On The Other Hand

As you know, I like to give a balanced article so in contradiction to our belief that the meter company (acting under the British Gas banner) is trying its damnedest to dish out cancer and other nasties, the lovely call handlers this morning saved me from a long, drawn out heart attack.

I’m involved in a new project which involves moving the gas and electricity meters a few feet to an external wall.  So imagine our surprise when we opened the shiny new gas meter box only to find no bl**dy meter! In past experience, the engineers simply moved the meter and hooked the supply back up again.  Apparently, that simple, clever system stopped ages ago and you now have to contact your supplier to disconnect the meter, book another company to relocate it, another to dig up the road if need be and your supplier to come back to reconnect the supply.  Experienced pros will know to book all these on the same day and preferably in the right order.  For some reason, I didn’t receive or read that bit of advice so this morning had a plumber with no gas supply and a builder about to lose his electricity supply as the “digging gang” had turned up to look for electrical wires in the middle of a busy street.

Two hours and eight phone calls later, Yarin from British Gas took me under his wing, played “Greensleeves” to calm me down whilst he put me on hold and assured me in his silky tones that all was in hand and an engineer would turn up in the morning to disconnect the meter, actually engage in some kind of meaningful conversation with the “installation gang” from the other company then set a time to come back and ensure a wonderful fast, capacious and efficient phase 3 electrical supply.

This house is round the corner from Sarah’s so let’s hope the engineer doesn’t find a spare smart meter in his van just to get me back.

However, This IS Smart!

If you haven’t discovered it yet, I recommend the British Gas mobile app which allows you to enter meter readings on site.  I used to write all the meter reads down on the back of an envelope and try to decipher which house the numbers belonged to. 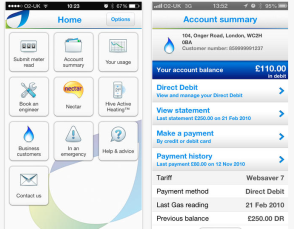 Filed under being a landlord, Management of an HMO

Tagged as HMO, How to be an HMO Landlord, Smart Meters, utility bills