I’ve just arrived home from a long weekend in Florence.   I could say it was to inspire a new creativity to my writing but , no, it followed an offer I couldn’t refuse.  However, if I’d been a sculptor or painter of Renaissance religious persuasion my mind would be exploding with images of mortals suffering hell and damnation alongside buxom half naked women and lavishly clothed saints displayed on beautiful 400 year old frescoes.

Instead, from day one I was bombarded with texts from Jamie, the potential tenant who seemed to forget what his job was or where he’d been living.  Flattering though it is to boast my very own stalker, it is starting to get a bit creepy.

Jamie: “U ok babe. Come on England” (Think this was a reference to the football?)

Me: “Who are you?” (I don’t tend to keep numbers unless they become a tenant) 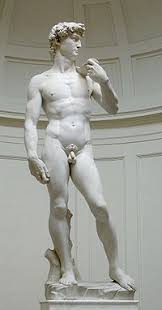 Jamie: “It’s a shame, cos ur fit an we could have had a lot of fun lol”

Hmmm, I think the 20ft high statue of the naked Michelangelo’s David holds more appeal even if he was 500 years old and a bit on the quiet side.

Otherwise mostly quiet from the other tenants as I’d put a note under everyone’s door explaining that I’d be unavailable (not away/abroad/on holiday – licence to misbehave) and to let them know that I wouldn’t be there for the usual rent collection so could they please exercise restraint and hold the cash for 48 hours and instructions on what to do in an emergency (call 999 for a fire, ambulance, police or  the builder if they’re locked out or there’s a leak) .   I’ve resorted to notes as they all seem to change their numbers or have multiple phones and I’m always the last to know.

Only Andrew managed to blow his rent between Saturday and Tuesday and another tenant thought I wouldn’t notice or meant I’d be collecting NEXT Tuesday.  Had a chat with Tom who said C.I.D. had popped round looking again for Andrew’s brother as well as several other people as it turns out the HMO address is being widely used by the locals whenever they get arrested.  CID said “I thought the house would be bigger than this considering the amount of names we’ve got registered as living here”.  Tom proudly pointed to the CCTV cameras and said “Not here, mate.  They see that CCTV notice and know not to come here cos if they’re that stupid they’ll find me waiting for them behind the front door.”  “Fair enough” said the copper, “I’ll put a note on the system but can’t make any guarantees you’ll be left alone”.

“Really?”  I said later.  “Do you think the cameras and signs are enough to put these guys off?”

Tom replied “It’s alright Sweetheart.  None of us even get pissed anymore or walk around in our pants in case you look at the recordings”.

I’ve just paid the CCTV installation bill and have decided it’s the best babysitting tool on the market – might even get one for home!

2 responses to “CCTV Babysits While HMO Landlady Goes on Holiday”